Le Xuan Truong, Lecturer at Hanoi University of Mining and Geology, who completed the PhD program in Geology (Major in Mineral Geology) at James Cook University in early 2022, under the Australia Awards Scholarships program (AAS). Truong recently shared his and his family’s rich experiences in Australia over the past six years. 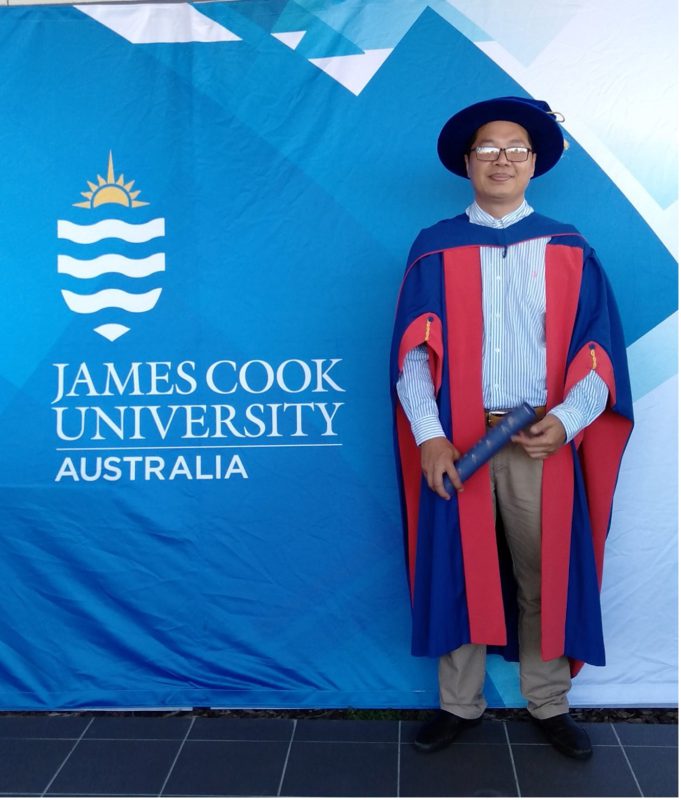 This was the second time Mr. Le Xuan Truong studied in Australia, but this experience was very different from his previous time (2012-2014). Although he had a lot to share, he wanted to convey to future AAS scholars some of the messages that he considered most important.

“The Australian government provided AAS scholars with a great support in terms of finance, legal procedures, social and academic activities, and ensured international students the best possible conditions to study and integrate into the Australian culture. My two children were exempt from tuition fees at Australian public schools. In short, I would say that my family was treated as well as Australian citizens while studying and working in Australia, except for the right to vote,” said Truong.

According to Truong, studying and doing research in Australia is a very hard job, but full of fun. As a doctoral candidate, his work was essentially self-study with the guidance and supervision of instructors. He proactively arranged his work schedule and working time to complete his research project in the allocated time of 4 years. “If you encounter difficulties and need help, the instructors will guide you to solve the problems. The university and peers also create favourable conditions for scholars to complete their courses at the best possible level. In short, AAS scholars are always treated as centre of the training program,” Truong said.

In response to question about how he overcame challenges from the COVID-19 pandemic, Truong shared: “The epidemic did not really affect my study program other than prolonging my research time because the laboratory was closed for a while, affecting the progress of our study and research work.”

According to Truong, every international student has their own circumstances and difficulties, but for most, the biggest difficulty is completing the study program with the best possible results. He says to overcome this challenge, the only way is to work hard and strengthen academic exchanges with international lecturers, colleagues and friends. Truong himself usually worked 10-12 hours per day, even 15-16 hours daily during the preparation of his thesis submission.

Integrating with Australian culture and adapting to a multicultural environment is another challenge for many international students, not only from Vietnam but also from many other countries. After graduating, Truong and his family could not return home due to travel restrictions during the epidemic, which gave them more time to deepen their understanding of Australian culture. “Integration is not just about fluently communicating with Australian colleagues at work. Australians have their own culture and history, and have their own unwritten protocol of conduct in every aspect of life. It is great to understand and mix well with Australians, but if you don’t and make mistakes, it’s okay if you are honest and sincere,” Truong shared.

During the period of social distancing, international students faced the same difficulties as local residents, such as not being able to work part-time, and shortages of food and essential goods at some points. However, Truong’s family and other AAS scholars were very well supported by the Australian government, enjoying the same support as Australian citizens during times of natural disasters or epidemics, such as financial assistance in the event of a flood or when the epidemic caused part-time work suspension. If they couldn’t return home after completing the course, AAS international students were supported by the Australian Government with an extended visa, living expenses and schooling for their children, the same as before the pandemic.

In addition, the international student support office and the university had many programs to support students with difficulties during the epidemic period, such as giving free food, consulting and ad-hoc assistance.

There are many things Le Xuan Truong feels proud of while studying in Australia, he recalled: “For me, there are two things worth mentioning most: First, overcoming my own barriers, earning a Doctoral degree in Australia with scientific research results being published in prestigious scientific journals of the world, are the proudest achievements for me and most of the PhD candidates in Australia. My second proudest thing was the opportunity for my family and I to live, study and work in such a beautiful and civilized country like Australia for nearly 6 years!”

Le Xuan Truong currently works as a lecturer in Mineral Geology. His plan is to continue to work and contribute to the development of the mineral geology industry in Vietnam, to share, exchange and learn from national and international colleagues, including Australian partners, in the field of geosciences. He also want to transfer as much as possible his new knowledge to Vietnamese students and scholars.